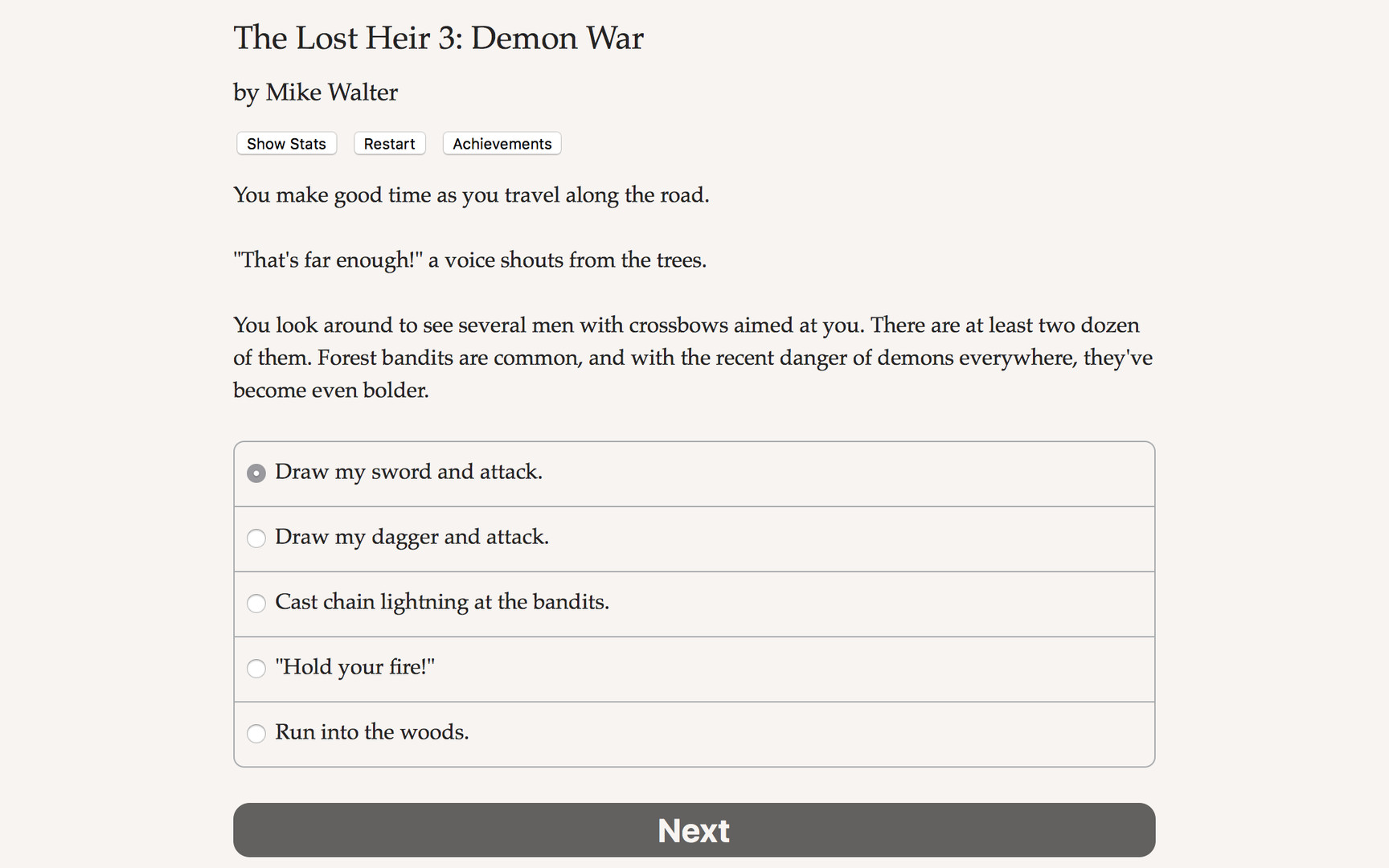 Defeat the rampaging demon horde, save the Kingdom of Daria, and avenge the death of your parents in the thrilling conclusion to this epic three part series! You’ll need all the power you can muster to finish building your legend, tapping into any of the dozen new prestige classes, including Druid of Decay, Dragon Knight, and even fighting the demons with their own fire by becoming a Demon Master!

The Lost Heir 3: Demon War is a 250,000-word interactive fantasy novel by Mike Walter—the conclusion to the trilogy—where your choices control the story. The game is entirely text-based—without graphics or sound effects—and fueled by the vast, unstoppable power of your imagination.

Face betrayal, seek romance, battle enemies in war, and navigate the intrigues of court. The fate of the kingdom of Daria is in your hands. 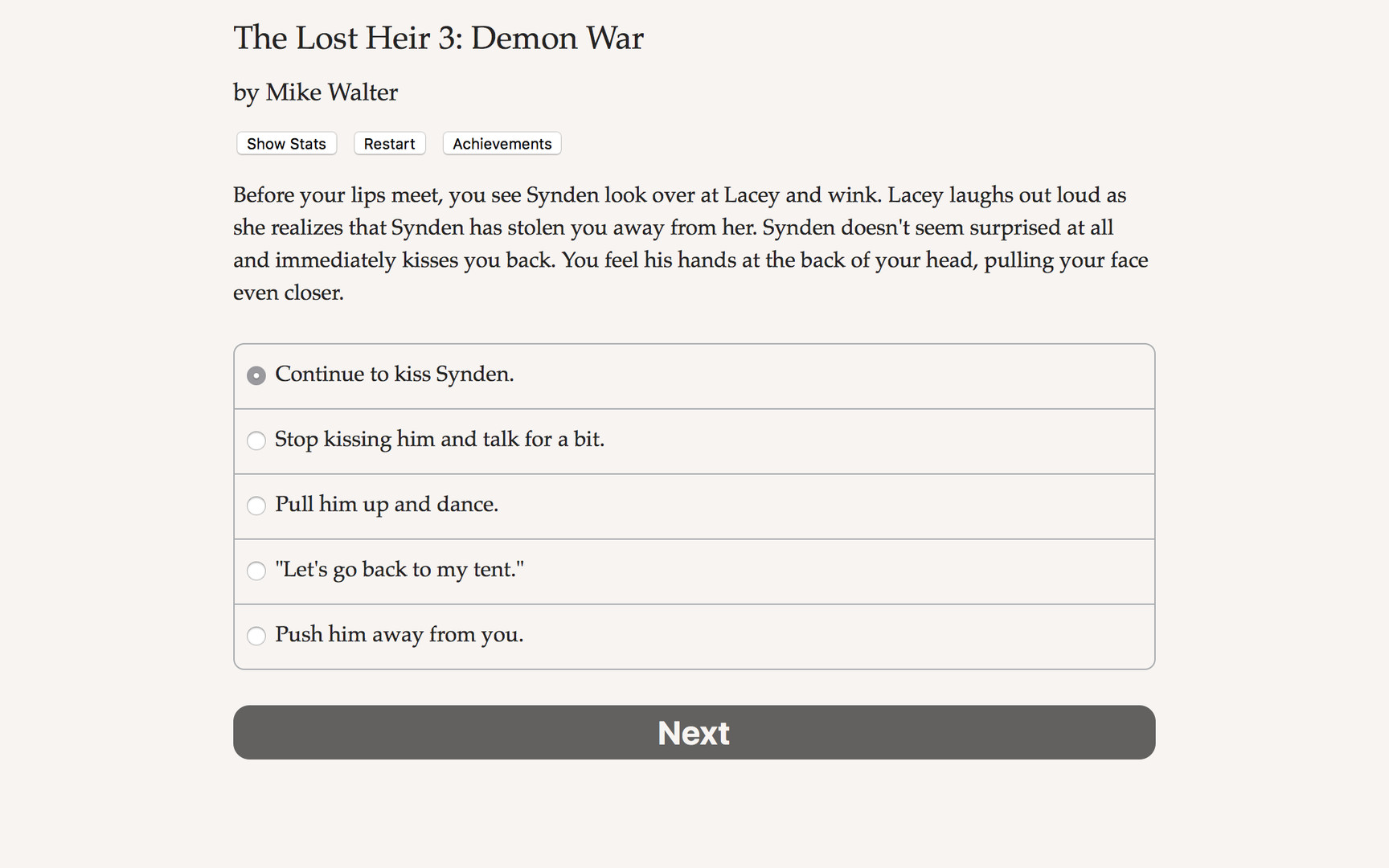 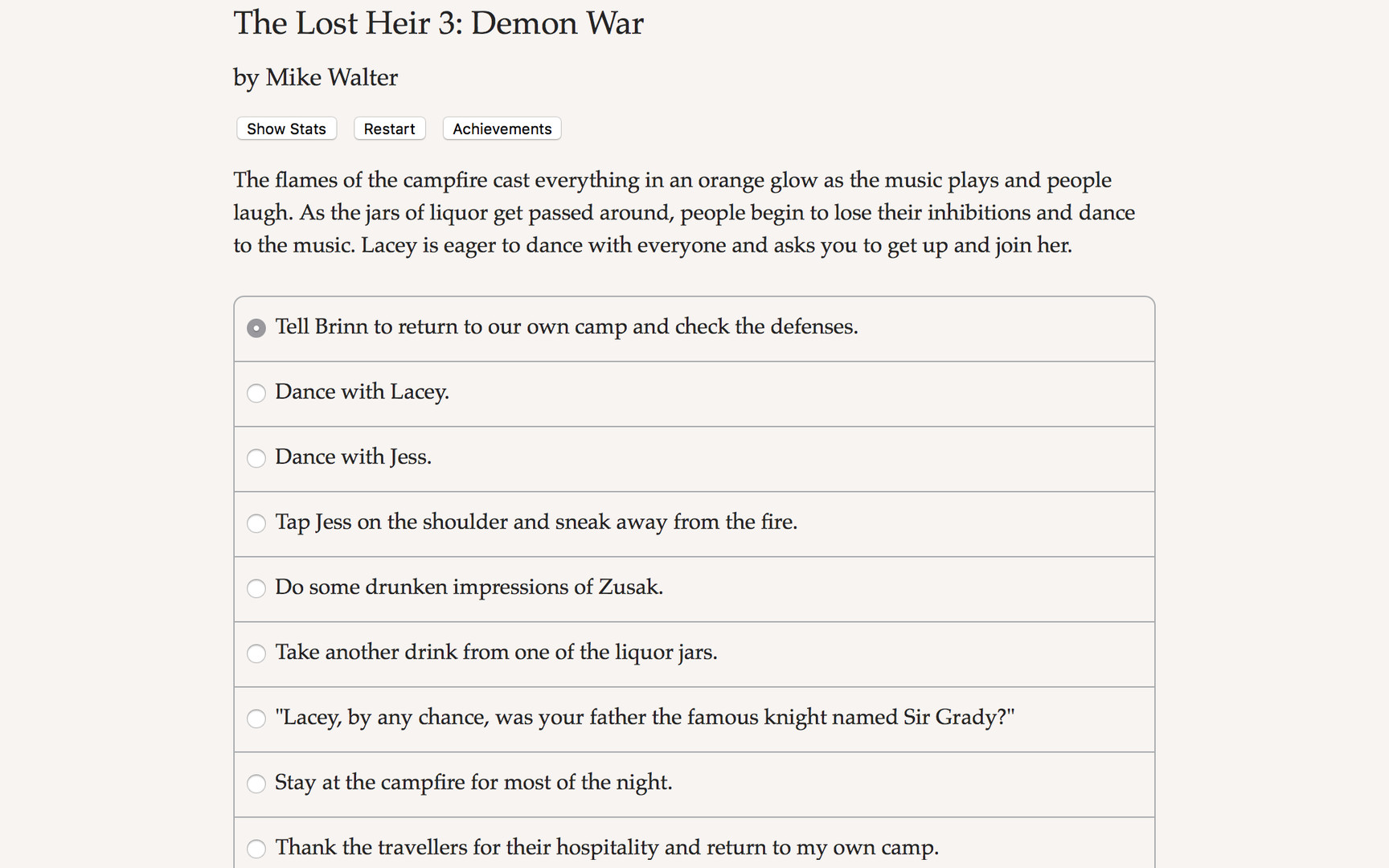 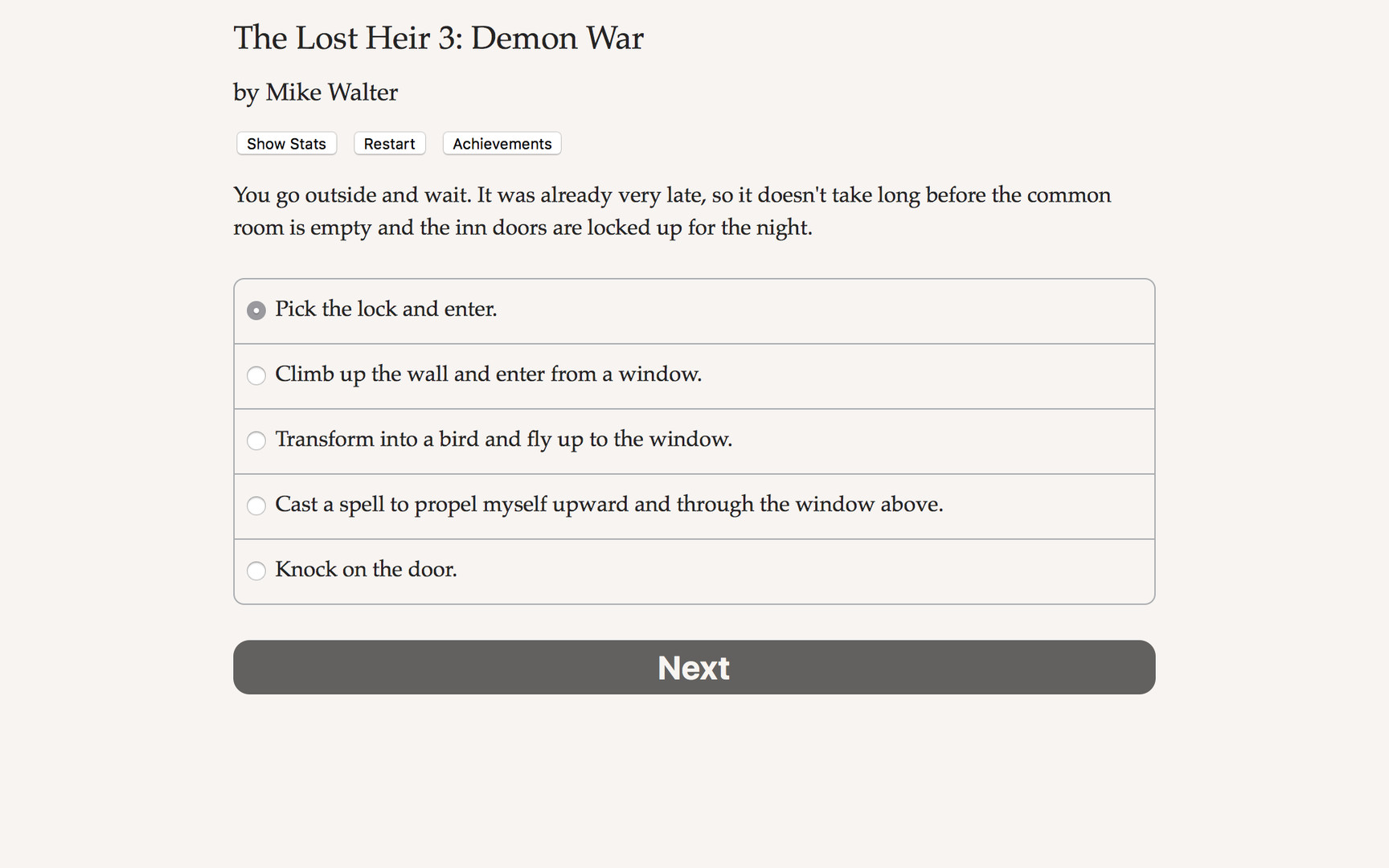 
Fun Game, But the stats have to be almost maxed in order to do most of the skill checks. Had alot of fun with the first two games. The ability to reach the desired outcomes through wildly differing means was this series greatest strength. It meant you could build your character how you wanted and still have a shot at victory if you prepared well enough. This game broke all of that with the finale. Almost nothing I choose seems to have a meaningful impact on how the final encounters play out. I would otherwise recommend this series for the fun had in 2.5 chapters, but the ending sequence just ruins the whole experience.
8-10 would play, but not twice.. part 3 is just crazy. just some weird story, taken so much too far into fiction that its not fun to read or play it.. This is the last episode of the Lost Heir. I enjoyed the text-only format, but I liked things like 'Colossal Adventure' a text only adventure from the time of the dawn of computers. There are several prestige classes available in game 3, but most require specific ability scores/skills/knowledge minimums, to qualify for. I understand that, for persuading you to replay it again, but you might find it frustrating first time around if you play it (as you should) without looking at any walkthroughs.

After that it really helps if you craft your character (from game 1) aided by a walkthrough guide, to give you exactly what stats you want by the time you get to Game 3. Overall, considering the cost of the games (small), I feel I got fine value.. part 3 is just crazy. just some weird story, taken so much too far into fiction that its not fun to read or play it.. Spoiler free review.

I really enjoyed this story and lore. In Part 3 you go to interesting new places and meet interesting new allies and enemies. My first playthrough was 4.4 hrs, so it's about 1.5 hrs longer then the first two games. However this game has one major problem, as well as a few minors ones.

The major problem: You need your stats at lv5 or 95-100 to win alot of the rolls. Some of these are just stupid, "failure, needed 100 strength to open window" really! WTF! I was especially\u2665\u2665\u2665\u2665\u2665\u2665\u2665\u2665when I was so badly injured, from the constant dying, i got "Your wounds will take a long time to heal -10 to various physical stats". It doesn't feel like a choose your own adventure when you're so limited by your stats. It feels like you're following a straight line and unless you stayed on that line for the entire 3 parts, you'll fail most of the time.

I would have also like'd to see more interaction between the core characters and romance options. What's the point of even having the relationship stat in the game if you're not going to use it.

Final Verdict:
I would only recommend this game on sale. It's longer than parts 1+2, but also more expensive. The problems just don't make it worth paying more for.. Played through all three games, the first two multiple times. Always angered and frustrated with the repeated failures these stories have to give out. This last one is no exception. I had a vague hope that perhaps the first two stories were intentionaly punishing to make a final sucess in the last one all the more rewarding. Alas that hope too was dashed. Honestly these stories would be better served with a perma death option, where the wrong choice atleast ends the story and forces you to start over again and try to guess what the one Right choice for each situation is. As it stands you just get "defeated" over and over each time weakened in one way or another that only ensures further defeat in the choices ahead.

I love this particular type of game. I love being able to choose how to develop a character and watch the story line change accordingly. So its really really hard for me to give this a thumbs down as there just really are not enough of these kind of games in my opinion.

Just a thought for the author, these games are meant to be a fun distraction. Perhaps In your next project you could keep that more in mind, and focus less on punishing the player so much for not picking the choice YOU think they should have chosen, or as mentioned before, just go for the perma kill and not keep dragging them along.