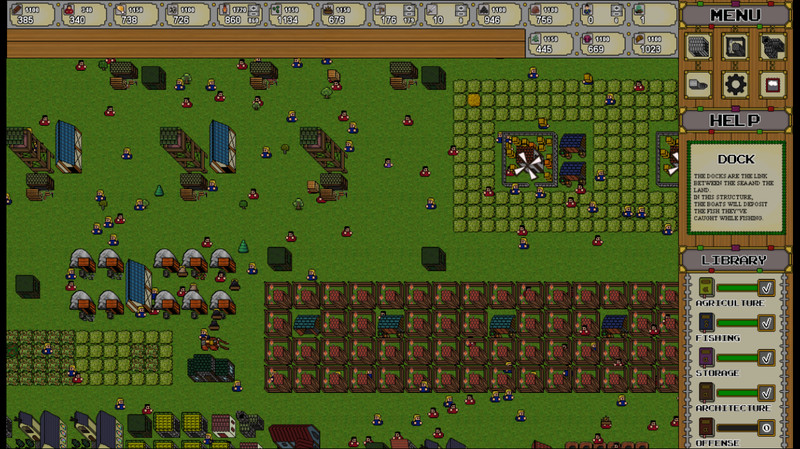 Pixel Survivors is a real time strategy - management game.
Create some land and help your initial villagers to survive during the first period of time.
Build houses for hosting your citizens, create chicken pens and farms to feed them.
Elevate forges and tailors to keep the population well dressed and with the necessary tools for working.
Contruct mines and foresting towers to get new resources once the surface has been wiped.
Improve the efficiency of your work by adding windmills and sawmills.
Once you've got a stable village, all you can do is expand your village and try to get a bigger population stable.
Have fun, and see how far you can get your village to grow! 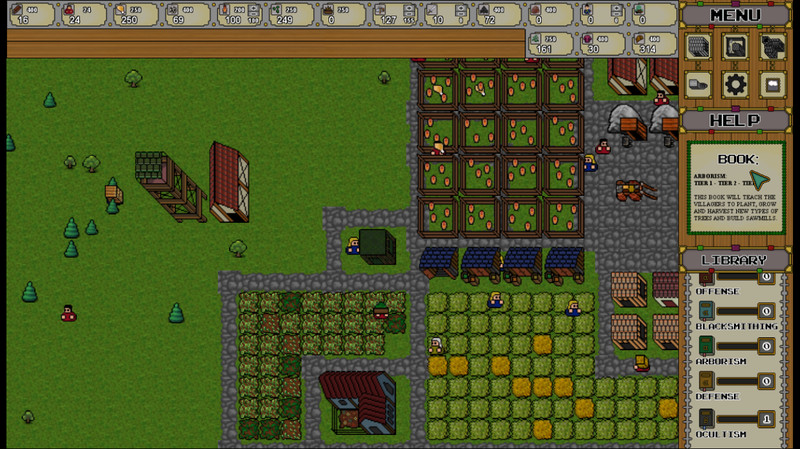 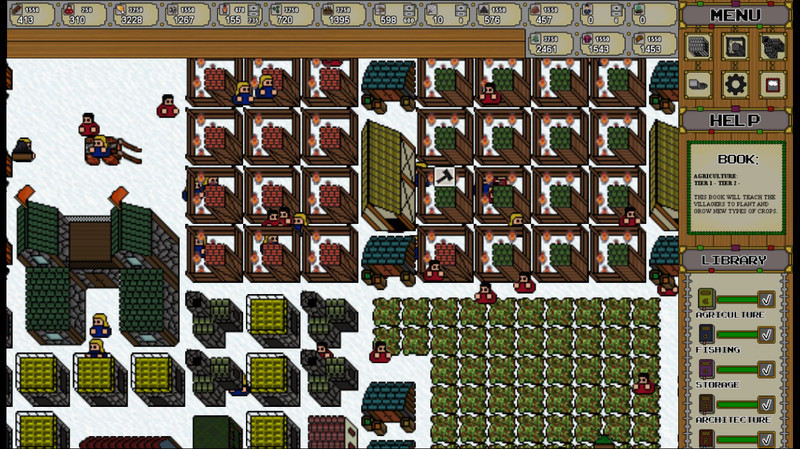 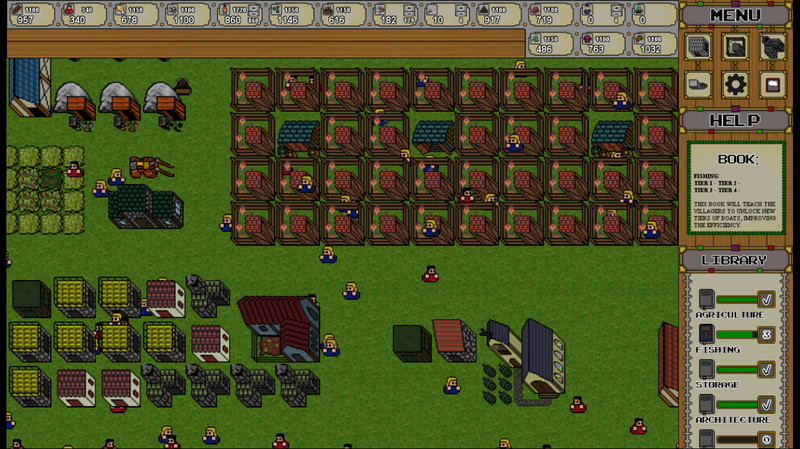 
So far I really like this game. It's a simple game, but it's not pretending to be more than it is. If you normally need a tutorial it can be difficult to figure out at first but once you learn it, it's not bad. The hardest part is figuring the ratio of certain buildings and such to the number of villagers you have, and the best places to put them. there was just an update that changes the way it plays a little, But from what I've seen the developer is very active in his(?) community. I've seen there posts and replies on many screenshots and forum discusions. i don't know what their plans are for the future of the game is, but I believe they try their best to please their players. The game as is is a decent, casual, time waster. I got it on sale, but I feel like the full price is worth it for the kind of game it is.

9\/10
-for tricking me into playing it for 4 hours straight when I only meant to play it for an hour.. Update: The AI has been updated, the game is a lot more intuitive now.

This game is an unforgiving RTS survival game with retro graphics.
You have to make sure all your basic ressources are allways available or the game is over.

I want to endorse this game, I really do.

However until the AI of the survivors is updated and they stop starving with tons of chicken already slaughtered in the pen, I cannot recommend. It's just way to frustrating not to be able to do anything....


I might just be stupid though.. I got this game a long time ago thinking for some reason that it would be fun and I would enjoy playing it. I don't know where to start, but it's not that good. I never really understood how to play it, it crashes sometimes when you launch it, The layout is unorganized, and the game is really confusing. I do not recommend this game.. In my opinion the game has to much bugs to be playable, sure its a early access but when there are more bugs then functions , it kills the game. Hope this will change later, but I dont recommend this game in this state of development.. I seriously don't understand all the recommendations this game's getting. Yes, the dev is still involved, but the game isn't fun. At least not yet. Be willing to just sit and look at the computer play the game once you've made land and put up a few buildings. The game's default save directory is the document's folder. Just avoid until it's out of beta and then take another look.


SUNDAY CONTEST! [CLOSED]:
Every once in a while we will make some random contest giving away Steam Wallets, and some games.

- Take the a screenshot of your best looking village.

We wish you a Merry Christmas, and a very happy New Year!

The Patagoniart Team. UPDATE 0.73.9 - WHO'S THE LEADER?:
Well guys, today we are presenting the 0.73.5. A patch dedicated to fixing the bugs created on the 0.73. As well as polishing and bugfixing plenty of broken stuff, we've added a new texture to the townhall. As well as a prototype for a leaderboard.

Well guys, the game is going quite well, slowly but surely I think I'm gaining my keep around here. So I came up with a development plan for the game, making Survivors one of a kind game.
Lets start from where we are right now:

- You can create some land.
- Add some buildings.
- Upgrade them.
- Pray it will be enough fun to keep you out of your troubles.

That being said, lets get to the DEV PLAN:

As it is right now, your villagers can deforest and destroy the land around them pretty quick. But that will change, I'll try my best to develop a tool system, where villagers will be able to craft tools, use them, and in rare (not so rare) occasions, break them. For that you will require to mine iron and coal. Then build a forge (new building), and then that raw resources will end up being stock in a tool-smith store (new building), and in a weapon-smith store (new building)

Then the fun part: With the weapon-smith store you'll be able to create weapons, to defend yourself... From who? From yourself...

What? Yes, every citizen that dies in game, will come back during the nights as zombie, ghoul, or skelly, haven't decide it yet (Suggestions are appreciated). You will be able to reduce the amount of undead by adding cemeterys and sanctuarys. So there you have two troubles to deal with, attacks during nights, and starvation during day. Well lets add a third one, is the charm, right? How about season. (To start off, summer and winter), so your villagers can also die of freezing. Then you would have to create a tailor shop (new building), and use the chicken feather's to make nice and cosy vest for your beloved citizens.

So there you go guys, you've wondered why the game was called Survivors, that's why, I just didn't know if I could accomplish all of that in a short period of time.
So resuming, whats coming:

According to the UI, I'll try to improve as I can, slowly but surely.
Guys, please keep in mind that I cannot do this as a full time job, but I'll try my best to make it as quick as possible.

Thank you guys for the patience, and join me to create an epic indie game we all could be proud of.

Sachonski, Survivors Dev.. UPDATE 1.08 - FULL RELEASE + HOTFIX!:
Well guys, the day has come. Today, after almost 2 years of development we are leaving Early Access.
We have learned a lot this past year on Steam, and we loved to interact with the community as the game improved over the months.
It took over 50 patches and major updates to get the game where it is right now. We've tried to improve what you guys think needed polishing for this patch, as well as adding new structures and a finalle to the game. Without further rambling here are the patch notes: