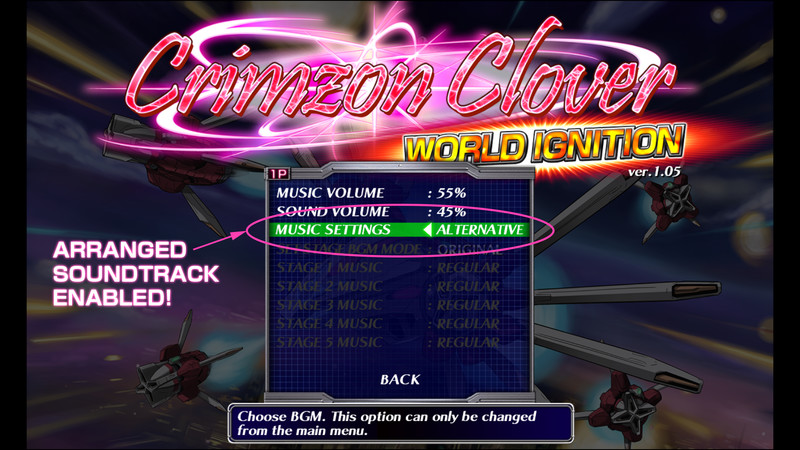 Celebrating the great support of Crimzon Clover's players, we are proud to bring you the Arranged Soundtrack for Crimzon Clover! This is a re-imagining of the original Crimzon Clover soundtrack by Locomalito's Gryzor87 (composer of arcade games Hydorah and Maldita Castilla). Elements of classic shmup soundtracks mix with Crimzon Clover's signature sound to create a new audio experience.

Contents of the AST include: 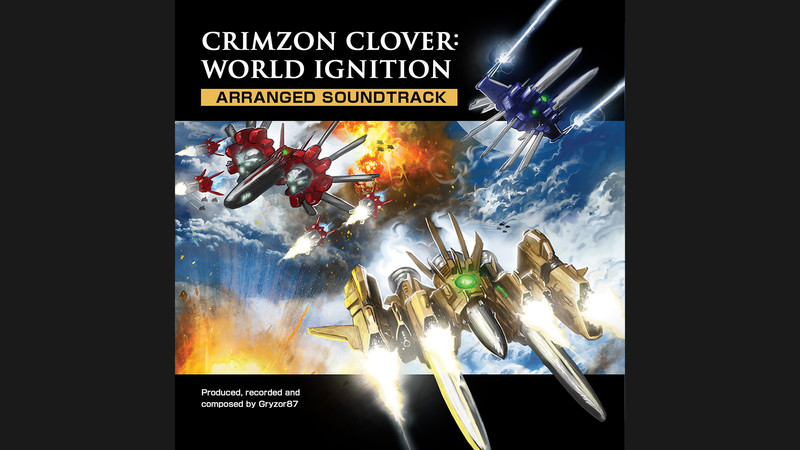 Soundtrack doesn't pack nearly as much punch as the original, I can't remember a single tune or beat.

When I booted up the game all my saves, scores, and progress was gone. All my replays, my badass 1cc on normal arcade vanihsed into the ether of nothingness.

Idea for better DLC than this: Slamming my genitals in the door.. Music tastes are quite subjective, so whether I'd recommend this soundtrack or not is based on what kind of game music you enjoy.

The one good thing I'll say for sure is that unlike the original soundtrack, which is compressed to 128 kbps, this one comes in lossless format.

What I find puzzling is that this is called an "Arranged" soundtrack even though none of the tracks resemble the original soundtrack. I was expecting arranges of "Cybernated City", "Transparent Stream", and the like, not an entirely new soundtrack. Misleading advertising, to say the least.. This is worth buying, it is very high quality and not just an afterthought they have added on to make some extra cash, like you feel with some DLC. (It's a shame we have to be cynical but nobody likes buying DLC and feeling like it wasn't really worth it.) I think this music is outstanding and really adds to the enjoyment of playing the game. You can really imagine being in an arcade with this playing.

You get both lossless (WAV) and 320k mp3 versions of the files.. Love it.
Unapologetic 80s synth rock influences, blend with videogame\/shmup sensibilities.
If Jan Hammer scored the original Star Fox, it would probably sound something like this.. I prefer the OST included with the game, which is more melodic and has a groove. I was expecting much more based on the claim that the AST was "painstakingly arranged to fit the action of the game perfectly." While the title, menu and between-stage music was decent, I found much of the actual in-stage music uninspiring and distracting.. Gryzor87 is one of the best Indie Game composers around. Most of the time, he makes music for Locomalito, a Spanish game developer who's behind some powerful arcade titles including Hydorah, Maldita Castila, and Guarodan. Sampling Gryzor's works from those games is easy enough because those particular games are freeware.

No seriously. Locomalito's games are free to download and play from his website. Look them up right now, you've got nothing to lose. I recommend trying out Hydorah first. Search it up, give it a play, then come back. I'll wait.

......No, yeah! You really did get that for free! Can you believe it!? And now you know what kind of music Gryzor87 can make!

Anyways. This arranged soundtrack DLC for Crimson Clover isn't free... But it's WORTH IT! The music is intense and rockin' from start to finish! That part about it being arranged to fit the action is certainly no lie either. When a miniboss appears, it immediately sounds more tense and powerful. When you're in an area void of enemies, it gets a bit suspenseful and when the enemies return, hits you in full force! But no matter the situation, the music's intensity NEVER lets up. It fits into the hectic environment of the game perfectly!

Put simply, this is the kind of music I wanted to hear in Crimson Clover from the very start. It's actually what got me to buy the game in the first place.

Oh! And in case you were wondering, the music (mainly boss tunes) DOES loop properly in-game if it has to! That was the only thing I didn't like about the Hydorah soundtrack, but it's a non-issue here!

So! Do not be afraid to purchase this DLC. Get it. Embrace it. Be proud to own it! If you're still on the fence, then fine, get it during a sale. And hey, by paying for it you supported a fantastic musical composer. Congratulations!. Soundtrack sounds amazing and, in my opinion, is leagues better in quality compared to the original soundtrack. It has a great 80's synth\/hard rock sound to it and really gets you into the levels and focused on the boss fights. Even the title music get pumped to tackle this STG head on. Gryzor87 hit it out of the park with this. I tried to go back to the OST and it just doesn't do it for me anymore.. I prefer the OST included with the game, which is more melodic and has a groove. I was expecting much more based on the claim that the AST was "painstakingly arranged to fit the action of the game perfectly." While the title, menu and between-stage music was decent, I found much of the actual in-stage music uninspiring and distracting.