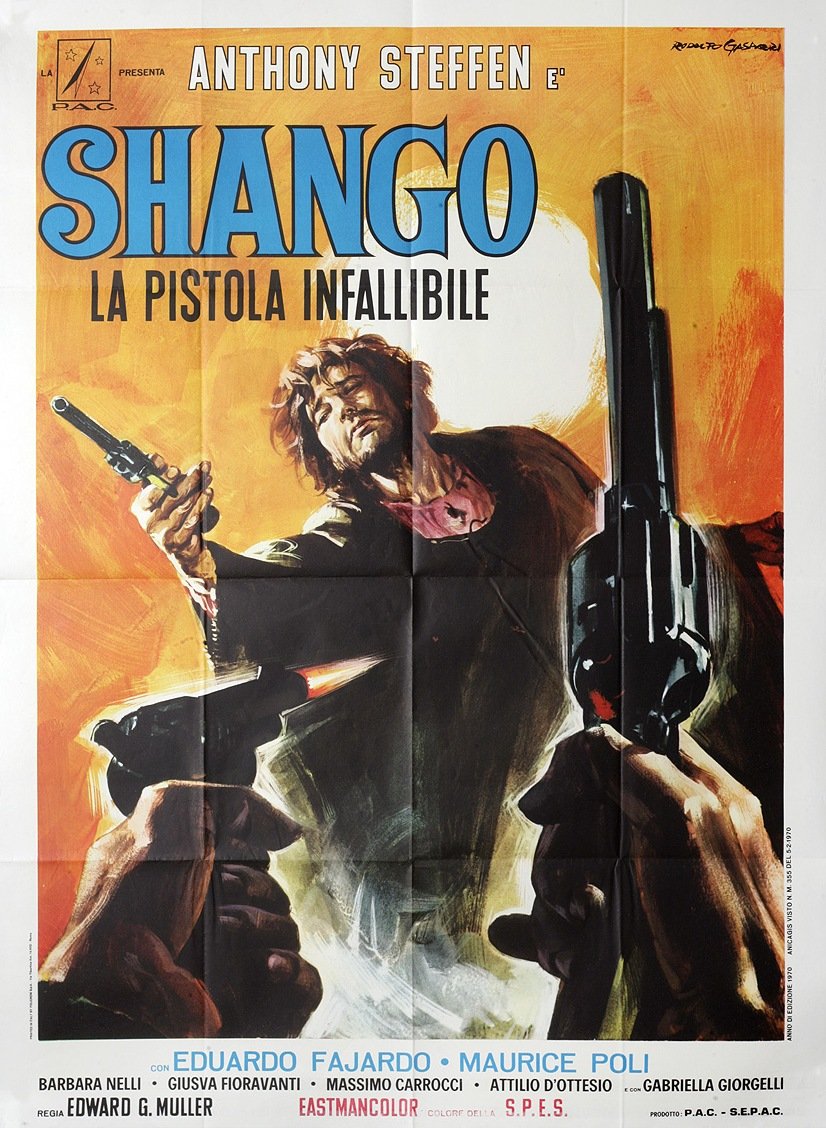 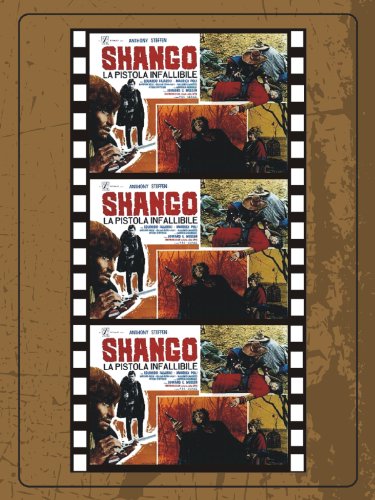 (1970) Anthony Steffen, Edjuardo Fajardo, Maurice Poli, Barbara Nelli, Andrea Scotti. Shango is a Texas Ranger who finds himself up against a former Confederate officer and his gang of thugs who have been terrorizing a local border town in search of gold.
Shango is a typical Anthony Steffen spaghetti western, beautifully photographed with great music, lots of sweaty Mediterranean actors posing as Mexicans, bad dubbing, and a sneering Eduardo Fajardo as a Confederate Major who is reluctant to see the south go down in defeat (a staple of these pasta oaters!). Lots of gun play, hurtling stunt men, put-upon villagers, and the reliable Steffen as Shango, a Texas Ranger who just wants folks to believe that the war is over. Good production values, great sets, fine music and lots of action make this one a winner, if you like spaghetti westerns. Franco Cleef's restoration is fine with only an unavoidable slight hiss on the soundtrack.
If you're a fan of Spaghetti Westerns like me, then you would first notice about this film directed by Edoardo Mulargia is how familiar, the plot is to other films like 1965's 'The Tramplers', 1966's 'The Good, the Bad, and the Ugly', 1967's 'Hellbenders' & most of all, 1967's 'Payment in Blood' film AKA 'Seven Winchesters for a Massacre,', 'Renegade Riders'. After all, most of these films deal with a group of people, trying to find gold, while a gang of ex-Confederate soldiers and Mexicans bandits chase them, down. The only different between those movies, and this, is the fact that this film, the gold is not even shown. Trust me, the whole treasure of gold, subplot goes nowhere. Instead, this film, mostly focus on, the former Confederate soldiers leaded by Major Droster (Eduardo Fajardo) terrorizing a Mexican town, while an ex-Texas Ranger, Shango (Anthony Steffen) tries to stop them. That's it! It's as generic as it comes. It's sucks, because a name like Shango should stand out, more. After all, its sounds like, 'Django', the fame Italian western character, whom obsessed with creepy out his enemies, by dragging a coffin, along with him. What happen, here!? Why is Shango so lame!? It's certainly, isn't the acting. Anthony Steffen does give, a very stoic and subdued performance, here, regardless, if some critics says, it's wooden. I think, it is how the character, was written was the fault. Steffen is incredibly weak here as the hero. He's either being captured, or escaping only to be captured again a short time later. It's weird, how the character can be, so cunning at some parts, but also, really, really dumb at other sequences. It's really hard to believe, that Shango still believes that he can still talk down the Major, after being, trapped in a wooden cages for weeks and seeing him, cruelly killed innocent people like women and children. Honestly, are we supposed to believe, that Shango doesn't have a clue, that the Major does know, that the Civil War is indeed over, after months of telling him, so!? He's quite violent! He had to know that he was crazy! Also, why did the Major think that Shango would make a good scapegoat for his murder plot in the beginning; when, he's supposedly need him to find the gold!? Does he want him, dead or not!? Why is this film, full of contradictions!? The chemistry between the two leads, doesn't really quite gel, as well, as I found their limited scenes, together to be hilarious. It's really odd to see, the Major go all mad in the end. That said, the action scenes between all the actors were horrible as well, with broad emptiness. Barely anything clever, happens. If it did occur, such as the dead body on a horse, trick and the sheep in wolf clothing scene; it didn't bring anything new, as we seen, these tricks, be done in other, better off, Spaghetti Westerns films. Furthermore, something else about this film I wasn't too keen on was how Anthony's gun never ran out of ammunition and nearly every villain, dies with one shot kills. Honestly, folks, it's unrealistic as well. After a few scenes like this, it quickly becomes tiresome. Even, the editing is a Z-grade. Lots of awkward badly cuts, throughout this film. A good example is a scene where the Major is talking to the leader of the Mexican gang, Martinez (Maurice Poli), only to be, follow by, by a shot of Shango talking to somebody. It's so badly splice, that it makes it look, like Shango is talking to the Major and Martinez rather than his helper, Fernandez (Attilio Dottesio). Before, I go further, I must addressed the elephant in the room. Yes, the little boy that plays Fernandez's young son, Pedrito (Valerio Fioravanti) did became a neo-fascist terrorist, later in his life, and yes, like his character in this film, he was also shot by an authority figure, trying to escape, while trying to steal guns. It's truly ironic. Despite that, it makes no excuse, for the director reused shots during gun fight in the Mexican party. It was very lazy. I hate how notorious low budget, this movie is. Shot at very few sets & location, it become very unintentionally funny to see, one location be used for multiply scenes. Another problem is how Di Stefano's music is disparity inserted at many places through a simple drum roll. Sometimes, it doesn't make sense. Also, some of it, was very annoying to listen to. It sounds like somebody playing a piano with a rock, missing all of the main keys. The audio is not first class, as well. English dubbing is just bad, as the words don't synch with the moving of the mouths. While, later DVDs would try to fit the problem, it clearly hasn't work, along with the grainy, unclean footage. Overall: Shango was no Django. It's a hard film to sit down and watch. I really can't recommended.