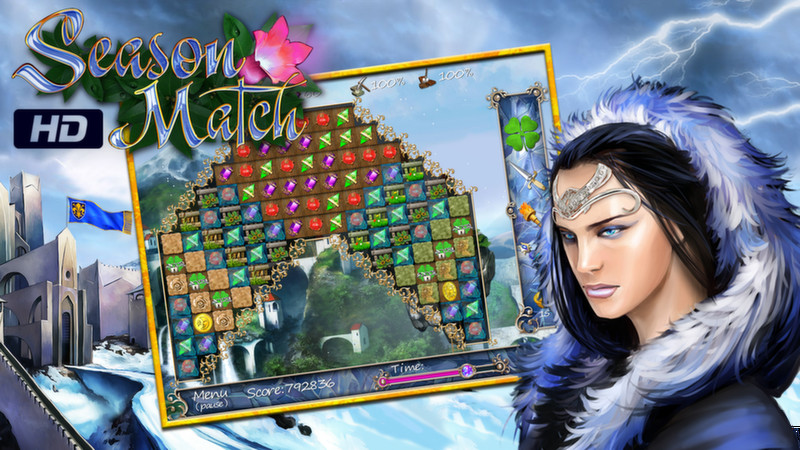 The story of Season Match starts when the Snow Queen has her magic mirror broken, and decides to make cold winter stay forever in the fairy-land. You will set out on a legendary journey to find the pieces of the broken mirror, put them together and beat the Snow Queen. 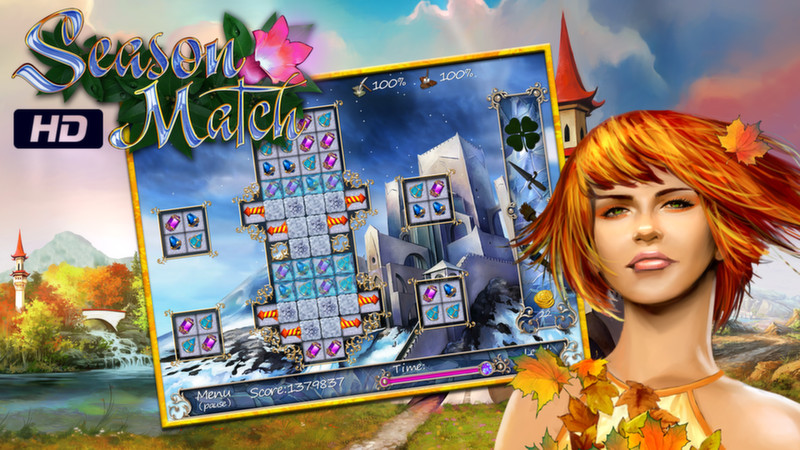 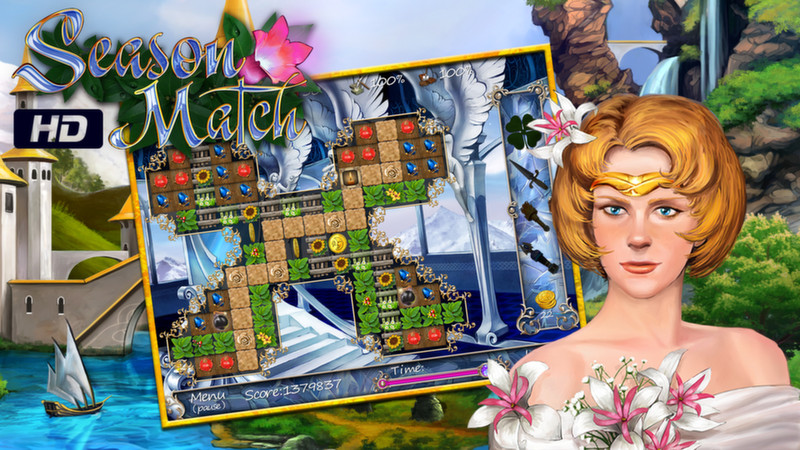 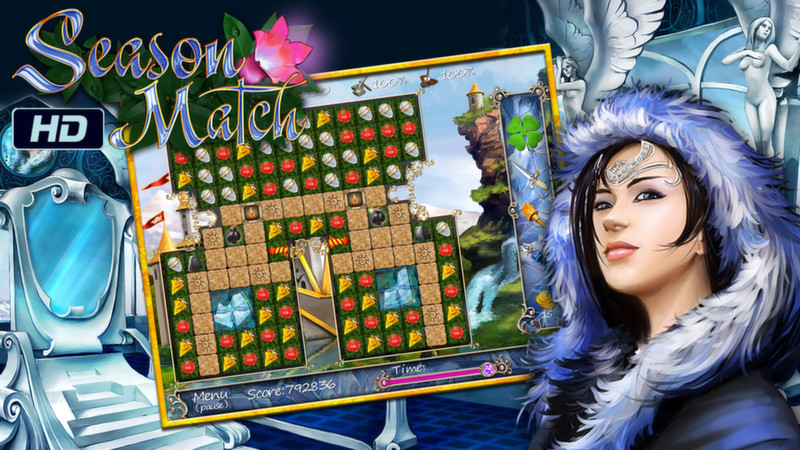 
This is very nice casual game, Mouse only and match 3 game, with trading cards and achievements.. Somewhat addictive casual game 16 hours of entertainment for me although i'm sure people could complete the game in less time, i haven't got very much bad to say about the game, i bought it thinking it was a match 3 in having to click and drag tiles but instead found it was simple clicker that you cannot lose a game of as if there's no possible moves the game gives you new tiles to work with.

It's nice to have a simplistic game that you can just take a chillout pill and take it easy and not have to concentrate too hard.. Gosh, what a bad game...
If anybody needs proof that a match-3 puzzle game isn't the kind of thing where you can afford to be a lazy programmer, then here it is.

PROS:
- None. Quite rare for me, as I'm easy to please when it comes to gaming.

CONS:
- The gameplay is a mix between 'Clickomania' (a very old match-3 game, and certainly not the most exciting kind) and 'modern' match-3's with powerups and other silly things. But Clickomania's main interest was based on whether you could remove all of the tiles from a board without any lockups. You know, an actual puzzle... There's no such thing here, and lockups most likely happen at the beginning of a stage when very few blocks are available to click on. Then the level just reshuffles, very slowly. And it's not even our fault...
- Sometimes when a level ends, nothing happens. You actually have to click the Menu button, then Resume, for the game to find its way again. And if it shows you an achievement, then you have to do it twice.
- Story is ridiculous. It's only told through a simple block of text at the beginning of each season (series of levels). I didn't get any story panel for Autumn, which is either a solid bug, or even more laziness on their side.
- The first season is mostly dedicated to tutorials, but you get rainbow blocks in a few levels before they're properly introduced.
- Clicks don't always register. A mortal sin for a match-3. In fact, there is no feeling of pleasure when you click stuff.
- The music is bland and generic, the graphics are passable in general but blocks themselves vary from okay to very ugly. And since you'll be spending most of your time watching them, hmm...
- Power-ups are incorrectly explained. Seriously, did the game bug and forget to tell me something?
- Some levels are hard and annoying (requiring you to wait for animations to complete so you can actually reach a single tile), and are followed by a very easy level. Where's the difficulty curve?
- Levels require you to click a certain amount of blocks of every color, but they also ask you to finish something that wasn't explained everywhere and that was expressed in percentage values... Okay... Except you have to get that value to zero, rather than 100. At that point, the game designer may very well be a misunderstood genius.
- When you complete a level, the game says it was level '2-1' (first episode, season 2) when the bottom of the screen gives you a sequential number (16). Quality check, anyone?!
- Level time limits are so short (even in relaxed mode, where running out of time doesn't end the level), that you can't help but think that they expect you to click mindlessly everywhere.
- Animations are so slow that you not only click mindlessly, you click *randomly* because you don't know in advance how many blocks will be removed by clicking them.

I just couldn't get myself to complete the quest mode. In fact, I'd be ashamed to finish it, because it would mean I got some pleasure out of it. Definitely not worth the $0.8 I paid for it.. tl;dr: Equally frustrating and boring. Do not play.

It is neither healthy nor wise for your player, when playing your game, to at any point think, "Oh dear god there's more." Nor is it healthy or wise for your player, when still in the middle of playing said game, takes time out of their gameplay to begin writing a very scathing review of said game. In "Season Match", the player is at the mercy of a physics engine so wonky, even Gordon Freeman wouldn't be able to make as see-saw out of it. Too many levels depend on the player being able to navigate a herd of gems through a narrow passage, and this is practically impossible between the unpredictable falling patterns of said gems and the unreliable rng creating more gems in an order that throws all strategy out the window. I was able to beat several levels just by furiously clicking around, as the gameplay is artificially lengthened by arbitrary goals of clearing X number of gems. The powerups are useless. The game doesn't even take the time to explain what they do and you can only refill your powerups on certain levels. Just used the magic wand? Too bad! This level only refills the dagger you never use. But wait! There's also gold you can collect and purchase refills for your powerups. Again, the game never tells you that you can do this, and I only found out through a session of random clicking when I was bored. And speaking of never telling you anything, there is no story. The game will make you believe there is, but three frames of animation, character stills, and four paragraphs of text do not a story make. As I crawl closer to the end of the game, all I can think of is that this is babby's first programming. It feels so cheaply made and thrown out onto the market as quickly as possible without any consideration of whether or not it's "good". The only silver lining I can find is that it'll make my achievement stats go up. Woo.. It's like popping bubblewrap, but way more fun.

I would gladly recommend this game to all my friends, and guess i have... ;). I expected much more from this game. I regret that I've bought it.. Simple matching game that runs smoothly and doesn't offer much to stand out from the rest. However, if you're looking for a simple, casual, and relaxing game of match then this fits the bill perfectly. The price is right, especially if you can find this on sale. The achievements are simple to get, though the arcade mode portion takes quite a grind to get to. Overall, not a bad indie game that is worth your while.