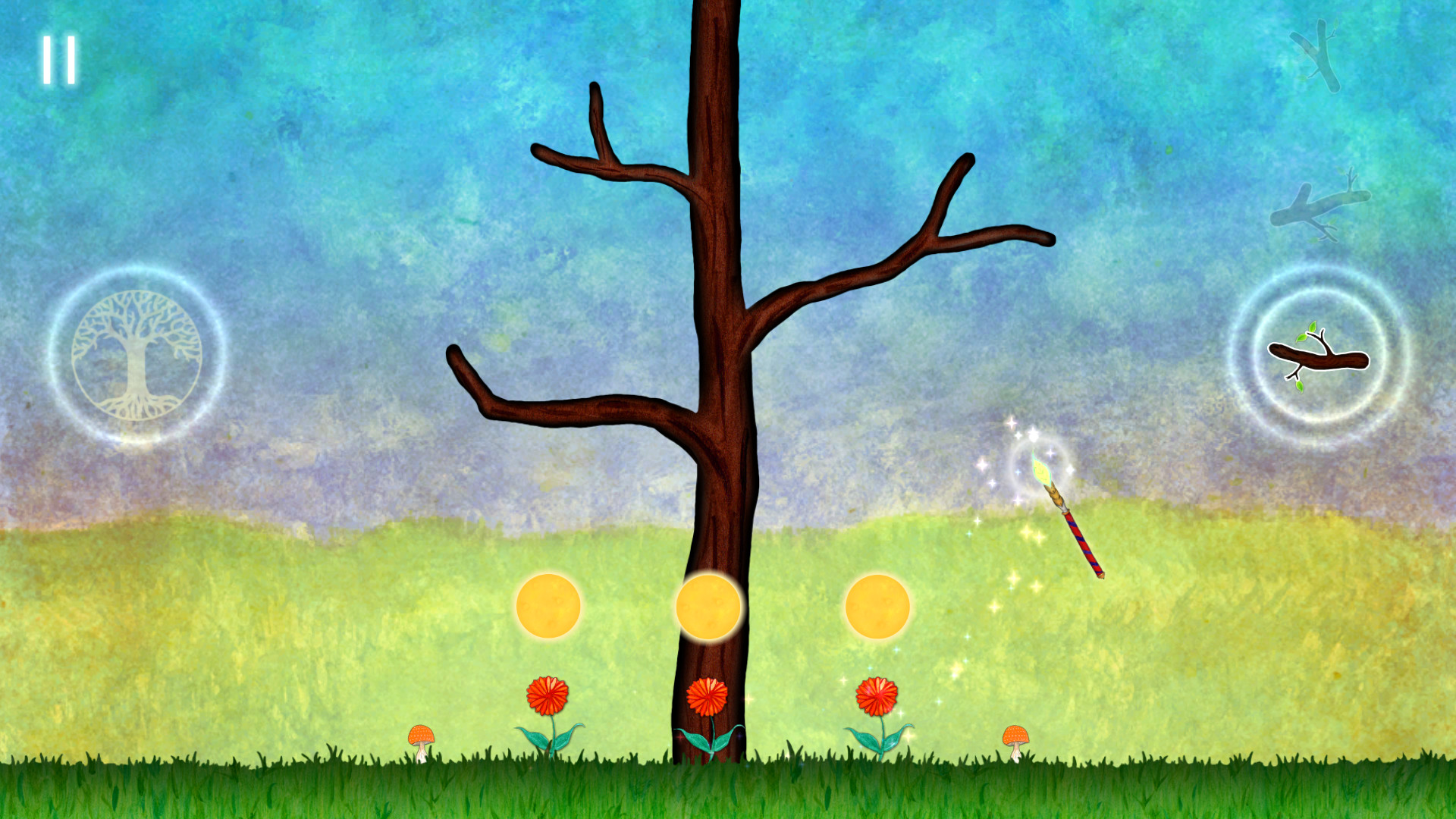 The goal of Let There Be Life is to chill out and relax.
The challenge is to grow trees the way *you* want.

Let your creativity and inner-artist take over, designing trees and protecting plants across the game's 34 levels.

Featuring fun and interactive wildlife in a calm watercolor environment, Let There Be Life can be enjoyed by everyone, young and old!

- Adding leaves increases the health of the trees, but...
- Plants on the ground below will die if in too much shadow!
- The farther you extend branches, the more health is added by new leaves.
- Mushrooms like shadows, and a fully grown mushroom resets the light for nearby plants.
- A variety of playful wildlife to unlock and interact with throughout the game. 7ad7b8b382 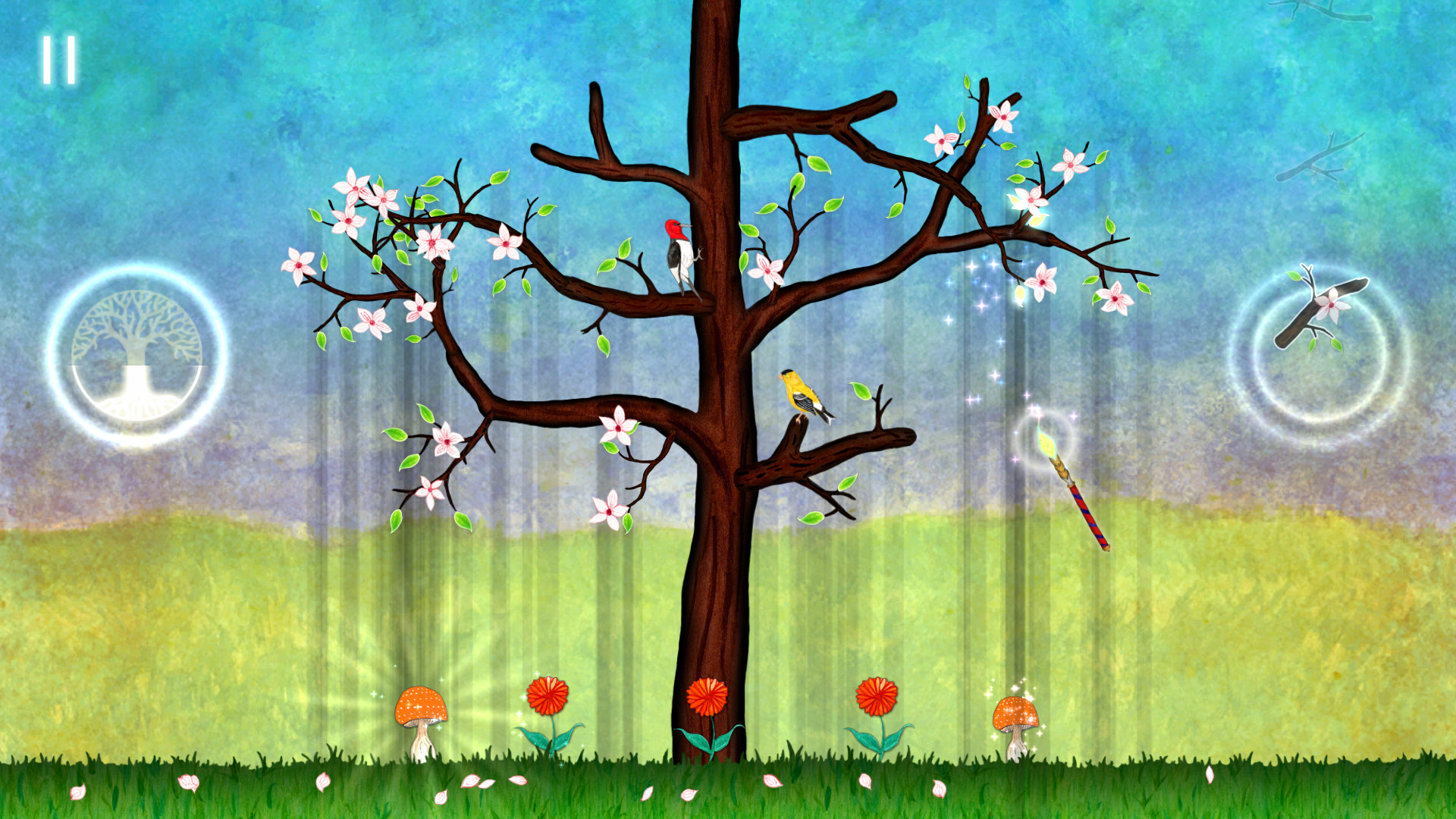 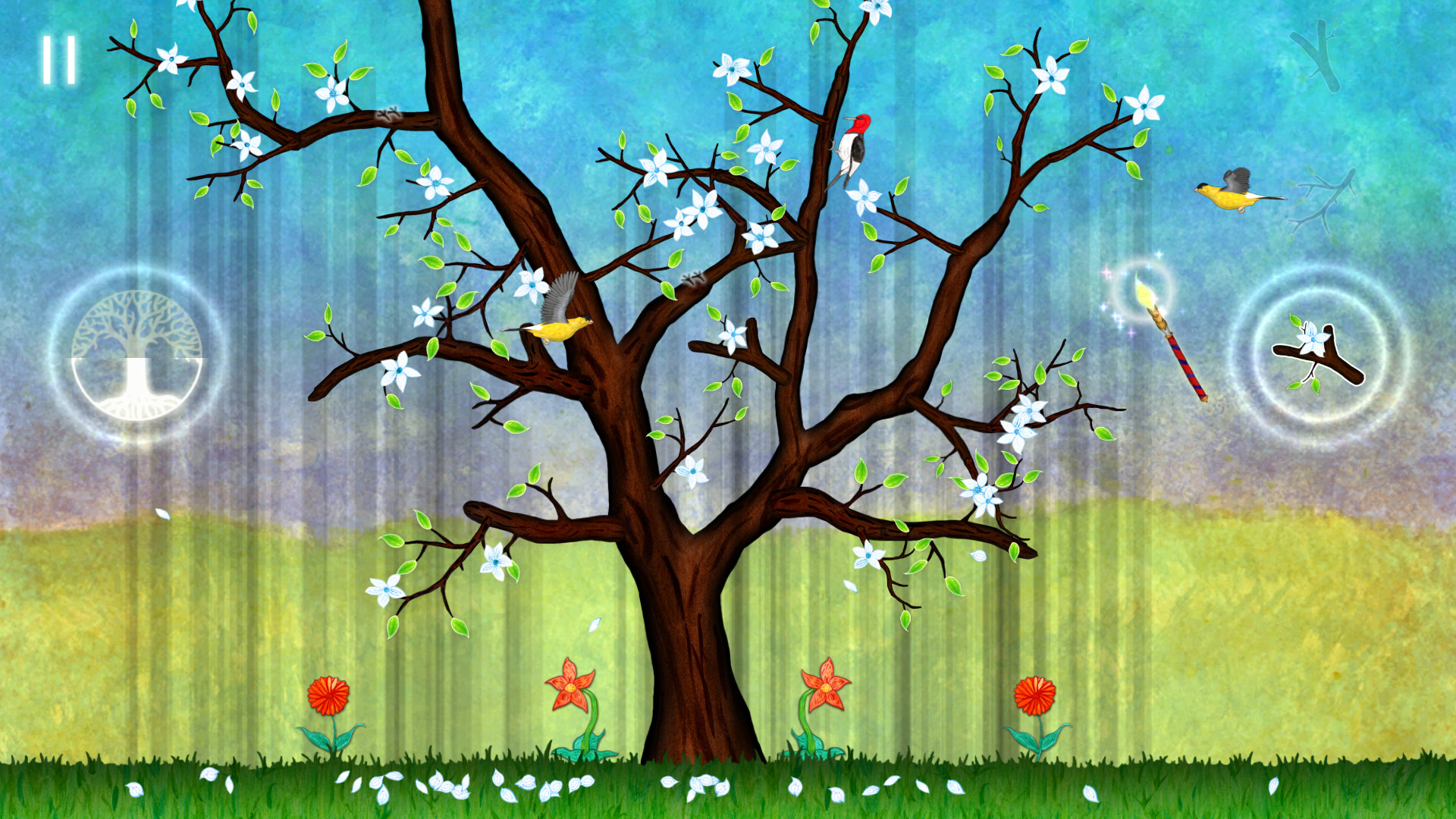 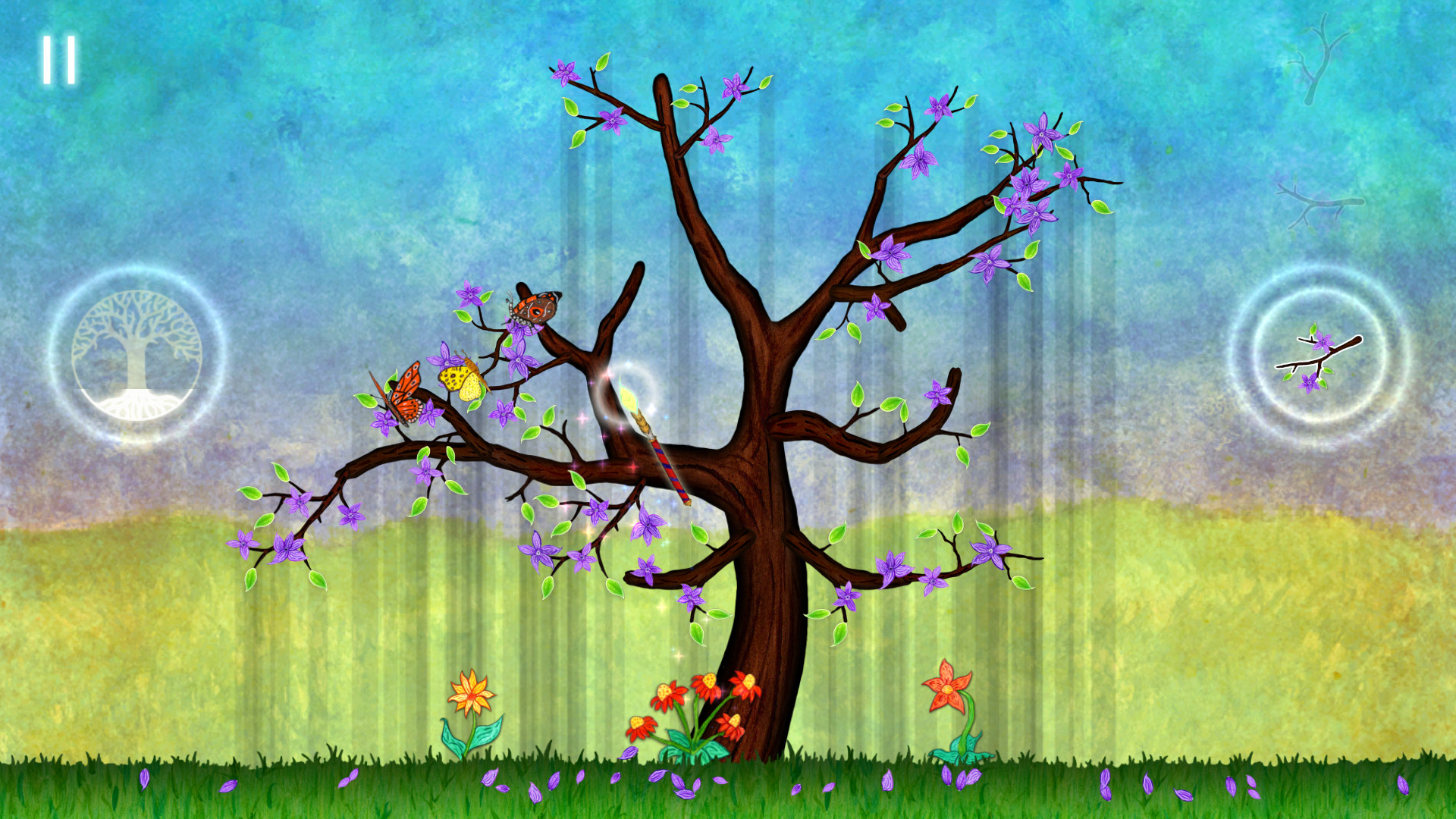 It's definitely relaxing, and is exactly as it seems from its sale page. I would recommend to people that are looking for something to wind down to. However, I feel for its simplicity and brevity, the game is a bit overpriced. Especially on Steam, where one can get games like Terraria that offer hundreds of hours of gameplay for nearly the same cost as this, which delivered merely 4 hours (of relaxing and unchallenging gameplay). It was a cute game, but I look forward to updates that make the purchase a bit more worthwhile as the developers continue to improve the game version.

Some suggestions may be to allow players to place flowers along with the branches, more levels, the ability to rotate pieces for less restrictive placements, perhaps levels with clouds (providing areas with natural shadow to work around), and maybe a wider range of creatures like squirrels, bats, spiderwebs, or even exotic themes with a whole different cast of animals, flowers and tree types.. I picked this up in the steam sale for \u00a32.79, and so take that into account.

This is a beautiful game. It is a very simple puzzle game, based on the mechanic of shade. The game is engaging without being particularly difficult, and a relaxed playthrough will give you 4-5 hours of play. This is definitely something that you will pick up again and while away time with once completed.

The placing of tree branches works well, and despite my best efforts to the contrary, the devs have done an excellent job enabling you to end up with something that does look like a tree.

The animals do a really nice job making the scene really alive, and the sound effects work well, even the butterfiles, which have the sound of laughing children.

There are one or two minor annoyances with the music. The background music is short loops of tracks, and some of them don't loop too well. While the soundtrack is not too bad, it definitely gets a bit annoying after a time. The music is simple versions of well known songs, so is not too much of an issue to lose.

If you are looking for something different, to while away some time, something that will engage your brain, and senses, without putting too much strain on the grey matter, pick this up.

. "Let There Be Life" was a wonderful relaxing game that helped me stay calm when I needed to! I recommend this game to people who enjoy relaxing stratagy games and nature.. when i bought this game i expected more of a sandbox game, and was disappointed to find out its more of a puzzle game. i was hoping for at least a sandbox mode; i was more into building the trees than following the constraints of not putting too much shadow on the flowers. its good for what it is though, a relaxing, casual puzzle game. not really worth the eight bucks. if i had known what the game was like beforehand, i probably only would have paid 5 dollars MAXIMUM for it. the art is cute and ill play anything with mushrooms in it though, so i was suckered in. if you like very easy strategic puzzle games, this is for you.

tl;dr: its almost like world of goo if world of goo was originally made to be a much simpler, watered down version.. Once you have played one level you have played them all. I doubt even a child would take any interest in this game beyond level 10. Game play is so repetitive, even for a casual game, you will fall asleep before you could fall in love with it. The concept is nice but I think it needs more work before it will give players any sense of accomplishment.. It's an easy puzzle with a charming art style and a peaceful, relaxing music. Just try to get it at discount price, as it's a bit short.. I really like the game. It is a good and fun way to kill the time.
One thing that I do not like is that you can not change the direction of the branches so they do not always fit where I want them to.. Great game for younger children, my daughter (7) played it and had great fun. have to admit, i enjoyed it too!. This was the first of two games produced by this company... www.backwardpies.com\/\" target=\"_blank\" rel=\"noopener\" >http:\/\/www.backwardpies.com\/<\/a>

It\u2019s a Zen like, relaxing, build a tree game. Your trees must provide cover for mushrooms on the ground, while at the same time avoid blocking sunlight for all the flowers. It's aimed predominantly for children and adults to play together. Problem is that there really isn't much on offer here and you will probably be bored with it within an hour or so. This isn't to say it isn't enjoyable to play, it is, but there isn't really anything challenging here.

The hand painted art is very stylish and the sounds of children laughing and the gorgeous accompanying music will often inspire a smile. There is a number of animated birds and butterflies which also help you become at peace as they brighten up your tree and make it come to life with all their fluttering\u2019s and noises.

34 levels, but they all follow practically the same principle, after you have done the first couple you can literally jump to the last level and pass it easily. You will then be given a key to open a door and credits roll, the end. This game is like another one I have played and if you enjoy this, then you would definitely enjoy 'Reach for the Sun' also available on Steam but has a bit more to offer in the way of a challenge than it does content. Because of the lack of playability on offer here I would honestly recommend to wait for a sale. Normal price seems way overpriced simply on the basis that there are a LOT of better games on offer that go rather cheap on Steam.

Tips for developer...
* You like to make informative games (your web page says) but there isn't anything informative here other than flowers like sunlight and mushrooms like shade. Maybe add a section where you unlock an information card with each tree you successfully grow as it would encourage the gamers to try each tree.
* Steam achievements would be a plus even for an easy game like this.
* It would have been interesting if the tree had to attend to the wildlife as well. Rebuild nests. Feed. Water.
* Seasonal mechanics would have been an interesting way to teach children as well such as rain, snow, and intense heat, autumn.
* Trading Cards, would really like some backgrounds for my steam profile of this game as the pictures are so relaxing to look at.

In final a game all about making a connection, but due to its simplicity you may wish for a summer sale...

Below is me playing the game first few levels, then showing you the last one...
https:\/\/youtu.be\/wJJCvwC3WBg<\/a>


If you enjoyed reading this review feel free to subscribe to my curator page. Thanks...

LTBL is just fine if you are tired after work and want some soothin...