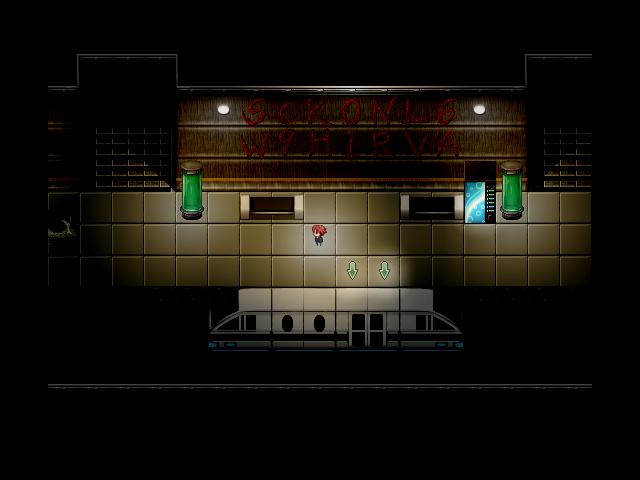 In a future not too far off, space travel has finally become ordinary and humanity seeks to exploit the infinite riches of the stars. Ayumi Sasaki and her family are part of such a mining spaceship, heading to a distant star to mine gold. When the lights go out though, Ayumi wakes up to find the spaceship crawling with monsters, blood covering everything. Help her survive as she explores a world covered in darkness!

The game is heavily based on the Lovecraftian Mythos (yellow mythos specifically), though knowledge of it is not required to enjoy it. 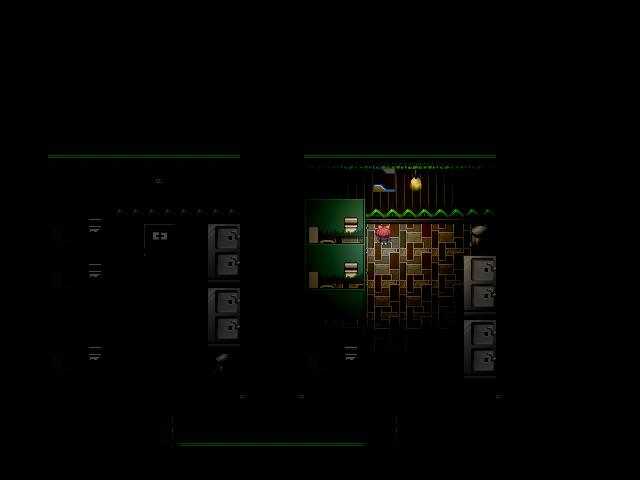 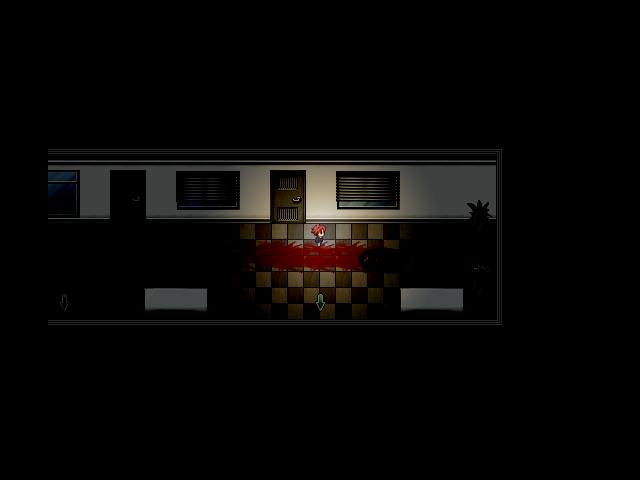 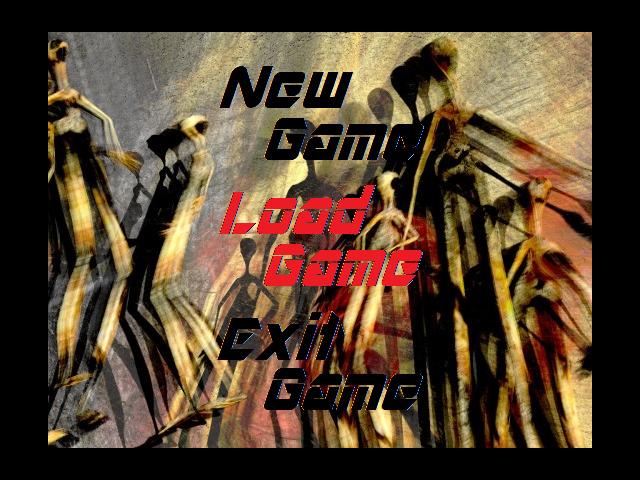 
If you like horror and rpgmaker this is your cup of tea. Also, while the orginal game is still here, they did clean up alot of the chase and puzzles so it overall is a much smoother experience (and doesn't detract from the atmosphere).. Decent little game for the price, and apparently achievements are coming<\/span> (cards are coming soon). I found the puzzles interesting, but I was able to go to the Old Hall section BEFORE the Greenhouse Section. This made the game more than a bit confusing. Especially since her dialog at certain parts was commenting on what happened in the Old Hall section, but then a few minutes later was speaking as if it never happened.

EDIT: Achievements are out, and I'm going to play on Nightmare now!

With the changes the developer has made and the price point I'm changing my tenative buy to a solid on. The game is worth the few dollars.. Worth buying~. This review is based on the 'normal' difficulty. I'll edit it in future if I ever feel like trying out 'nightmare' for the different ending.

I really wish Steam allowed us to rate more flexibly than simple positive\/negative. For the moment I'm going to go with my gut instinct and say that no, I wouldn't suggest the full price for this game. I give it roughly a 4\/10 for now.

'Ayumi' isn't a bad<\/i> game. In fact, there's a lot of potential which I am hoping is tapped in the 'nightmare' difficulty. However, I don't particularly feel drawn to dive right back in to find out.

While it is certainly creepy wandering around the blood-splattered spaceship, catching twisted hints to Lovecraftian themes, I can't say that a 'normal' playthrough provides you with enough meat as I would have hoped. I've read\/viewed some Lovecraft but not much of Hastur. This perhaps stifled my enjoyment.

Unless you are completely dense, you'll almost immediately work out that Ayumi's parents are dead and she must have been deeply affected by it<\/span><\/span>. You do have a sense of pity for the little scamp.

The story did appear to be going somewhere dark and intriguing. You simply wind up walking into a "fluffy kittens here's big bro and it was all a nightmare!"<\/span><\/span> ending far too easily in the 'normal' mode. I even went back the first time to try to make sure I cleared an area. Still not much more to add to the story.

It's possible I missed something because although I tried to be thorough, there are portions of the spaceship which are frustratingly labyrinthine. If I could have bought a map from the small stores you find throughout, I feel this would have gone a long way to easing my frustration.

I think that if you buy this, perhaps skip to 'nightmare' mode? I'm not sure you'd actually miss much from the 'normal' setting and you'd probably find a satisfying conclusion. There are plenty of free RPGMaker games out there with quite a bit of content (go look up the sites) so it's hard for me to justify one with what feels like a demo as it's 'normal' playthrough.

This has promise. Maybe I'd find it in the other mode. We'll see when I muster the will to run through this game again.. Ayumi is a pretty good horror game at a nice price.
I've loved rpgmaker horror games for several years now. With a crappy laptop that couldn't cope with most games, they were the only games I could play without giving my laptop a heart attack. I won't say Ayumi is up there with The Witch's House and Ib, but it's a decent effort.
I'm a sucker for spaceship horror, and the atmosphere to be found in Ayumi's eerie deserted spaceship did not disappoint me.
Although it claims inspiration from Lovecraft and The King in Yellow, I found more in common with Dead Space (the dev is seemingly aware of this - peppering the game with references). The story doesn't suffer from the comparison however. Ayumi doesn't go out of its way to explain what is happening, putting you more in the shoes of the protagonist as she explores. In the protagonist I found someone I could sympathise with, particularly as I started to suspect just what had happened.
There is lots to explore and lots of secrets to uncover. The game is relatively short, and even shorter if you just go for the ending.
There were a few things I disliked - the enemies who kill you instantly when you walk into them. Granted, they are easy to avoid, but in the dark I found myself wandering into bugs more often than I care to admit. The credits system helps here, as you can use them to activate security mechs which clear the area for you.
As far as I can tell there are no original assets, everything is from rpgmaker. But the creativity present in the game makes up for it in my opinion.
There is no menu, or inventory screen. The only way to quit the game, besides closing manually, is in the save rooms and there's no way to see what items you have. The latter annoyed me more, as I couldn't see which keys I had. There's also no map, which didn't really bother me but was kind of annoying at certain points.
All in all, I enjoyed Ayumi - I'm sure I'll go back to it at some point to see if there are other endings, and to try and pick up the other achievements.. Ayumi: Enhanced Edition is a great little game. I purchased this in January shortly after the 2.55 update, and was pleasantly surprised at how well this title is put together. The game makes heavy use of pre-made assets, but it does so in a way that builds an atmosphere of horror and suspence. The scares are spaced out in such a way that the game builds up a sense of dread, and then does something shocking, which made me jump more than a couple of times. As far as content, there's a lot of game here. You can finish this title in about an hour or so, but there's so many little things to find, as well as alternate endings. The game's story is interesting, and is sprinkled with bits of Lovecraftian mythos, which really helps to set the stage. This product is well worth the asking price, and the creator Lord Rutsah has put a lot of love into this title, and it shows.


Version 2.7:
Minor Patch:
-Fixed a few spelling mistakes and removed a few japanese-ish words.
-Changed a few descriptions to make the game more gloomy.
-The player finding Suzuka's card will no longer disable the nagas attacking.
-Now when the player presses on the rejuverantion pods his current credits will appear.. Errors Fixed:
Reported bugs have been fixed, you're good to go.. Version 3.00 Progress:
Improvements:
-Money indications: Now every time you get credits, there will be a separate window telling you how many you have in total.
-Redesigned the male bathrooms robot. Now it doesn't transform into a monster and is instead a talkable NPC (visit the facebook page for explanations on that).
-New opening screen with original art! (I know, right?!)
-New text font, to get you into the atmosphere of Ayumi.
-Chasing polyps enemies have been added on nightmare difficulty!
-Power Cells added in various areas.
-New areas added!

All that's left is for me to make the new trailer, and I'm uploading! It will be either today or tomorrow.. Version 2.6:
Nothing major, minor bug fixes all over, along with making one of the achievements a bit easier. Also a few minor dialogue changes, especially in the Religious Center.. New version uploaded:
Nothing major, just a few bug fixes. The game will no longer crash in vents or when entering the Rich Quarters.. Version 2.2 Up and Running!:
Steam achievements (along with a few extra events and some dialogue changes) have been added! Keep in mind that the achievement unlocked icon won't be displayed in-game (can't do anything about that, sorry), but you will earn the achievements normally.

When the month ends and I get the first income I will start looking for a manga artist to do card artwork so I can add Steam Trading Cards as well.

. Version 3.0 Released!:
Enjoy the fully updated Ayumi!~. Version 2.2:
Either today or tomorrow (7/14 or 7/15 version 2.2 is coming out, featuring Steam Achievements, as well as a bit of extra content (more Yellow Mythos stuff), look forward to it!. More fixes done:
If the game crashes anywhere or does not work as intended (for example returning to the old form of the flashlight after exiting some surface), report it, I can fix them pretty fast now that I know the drill.

(the first part of the code, found in Ayumi, can be used in Broken Reality to also open a chest). Last Version Update:
Guys the final version of Ayumi will be a bit late, since instead of the original idea to make a new area I've ended up with two. The first (original) area is mostly a secret one to find, but has a bigger length then most of the game's other sections. Ayumi's flashlight gets broken and she must make her way back to the main areas with very limited light. The area plays a lot with power sources, making the player choose which areas will have light. Personally I already consider it the scariest section of the game, as you're basically going blind.

Now the second area... The second area will be the new endgame area instead of Ayumi returning to her bed, that's unlocked instead after discovering your parents'... Eeeh... Situation (they've been changed to eggs for the next version, the letter they leave you has also become way more updated). And in this new area... Well, I don't wanna spoil too much but things will go batshit insane. Unfortunately I had to give up a bit of the subtle child psychology symbolism, but it is replaced by absolute Mythos insanity. The game will get really disturbing.

Even you who have already finished the game, I urge you to give it another try once the new, final version 2.4 is released. I promise you will love it.